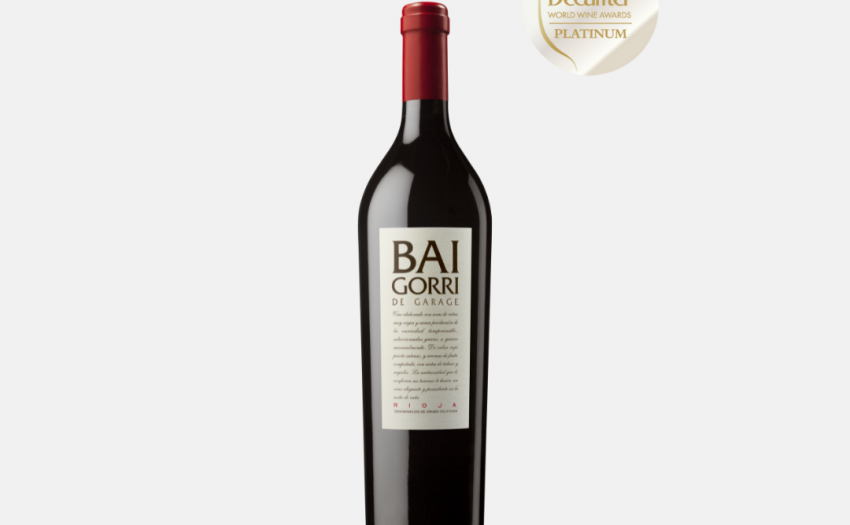 The results of the Decanter World Wine Awards 2022, perhaps one of the most prestigious and influential wine competitions in the world, were announced just a few days ago (7 June).
The best experts in the world of wine have participated in the 19th edition as part of the jury, recognising Baigorri De Garage with a Platinum Medal and a score of +97, placing it among the best wines of Spain. Among all the participating wines (from all the wine regions of the world), 22 Platinum Medals and 92 Gold Medals were awarded to Spanish wines.
The jury of this latest edition of the Decanter Awards, composed of a total of 250 members including 41 Masters of Wine and 12 Master Sommeliers, described Baigorri De Garage after the blind tasting as follows: “Splendid bouquet of baked plums and bitter chocolate. There is a satisfying density to the black fruit character with fabulous concentration and a pleasing silky texture as the wine moves across the palate. It has depth and balance, can go a long way and will only get better with time. An exciting, ultra-modern Rioja.
The 19th edition of the Decanter Awards broke all records in terms of wines tasted, with the jury evaluating 18,244 wines from up to 54 countries, with one of the big winners being Baigorri De Garage.
De Garage
Made from Tempranillo grapes grown in micro-plots in Samaniego, a small village in the heart of the Rioja Alavesa. Old vineyards of more than 60 years old on very poor calcareous clay soils and worked under a sustainable viticulture.
After a manual and very selective harvest, the grapes arrive at the winery where they are selected berry by berry, using vibration and weight selection tables. Long macerations and intracellular fermentations with indigenous yeasts in oak vats. Natural pumping over and final extraction by gravity. Malolactic fermentation in new French oak barrels and subsequent oxidative ageing of around 22 months (depending on the vintage). This is one of Bodegas Baigorri’s most limited productions.

BAIGORRI GARNACHA, THE BEST GARNACHA OF...

No images found!
Try some other hashtag or username

You can find out more about which cookies we are using or switch them off in settings.

This website uses cookies so that we can provide you with the best user experience possible. Cookie information is stored in your browser and performs functions such as recognising you when you return to our website and helping our team to understand which sections of the website you find most interesting and useful.

Strictly Necessary Cookie should be enabled at all times so that we can save your preferences for cookie settings.

If you disable this cookie, we will not be able to save your preferences. This means that every time you visit this website you will need to enable or disable cookies again.

This website uses Google Analytics to collect anonymous information such as the number of visitors to the site, and the most popular pages.

Please enable Strictly Necessary Cookies first so that we can save your preferences!